Ashley’s Story: How motherhood helped her understand the importance of being an egg donor

When Ashley Long first became an egg donor in 2016, she was single and did not yet have any children of her own. She was inspired to help create a family because of her own family’s experience with adoption. “My great-grandmother could not have children, and she adopted my grandmother,” Ashley says. “After learning about egg donation from a friend, I knew it was something I wanted to do to honor my grandmother. I’ve also had several people close to me who have struggled to get pregnant.”

During her first cycle, Ashley received a touching letter from the intended parents. “I was speechless,” she says. “It brought tears to my eyes to hear how excited they were and how grateful they were that I was doing this for them. And it really wasn’t anything for me to do it. I was young, and I could, so why wouldn’t I?”

Reading their story and how thankful they were made a lasting impression on Ashley, so much, in fact, that she went on to do two additional egg donation cycles for other intended parents. But it wasn’t until she had her own child that she truly understood the difference she had made in the lives of the parents whose families she helped create.

Ashley married her husband, Josh, in October 2018. Their son, Colton Todd, was born in January 2020, making them a happy family of three.

Since becoming a mom, Ashley says she has even more compassion for intended parents, many of whom have been trying to conceive for many years and/or have experienced pregnancy loss. “I can’t imagine what they go through,” she says. “I think everyone deserves a chance to feel that love you have for your child. I didn’t understand what that really meant until I had my son.”

Are you interested in becoming an egg donor? Learn more about how you can be the solution and help create a family by visiting www.eggdonorinformation.com. 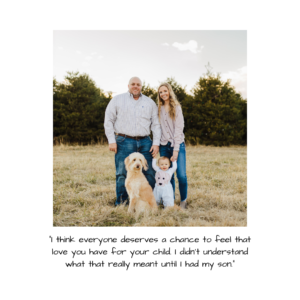