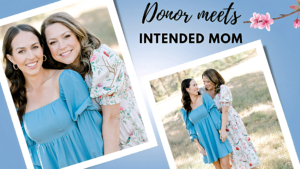 It was a wonderful experience for her, she remembers: She was discouraged at first thinking she would never be matched. She almost gave up thinking she was not meant for this role. But then it all came together, and it developed into a wonderful journey.

Chelsea’s egg donor process began as any other, applications, blood tests, psychological tests, contracts, etc. Everything was going according to plan. However, as they say, expect the unexpected, and that was exactly what Chelsea experienced when the staff at Egg Donor & Surrogate Solutions called to ask if she would be willing to meet the intended mother. Despite being overwhelmed by emotions, she accepted without hesitation. Because Chelsea was walking into the meeting blind, she was quite nervous, unlike the intended parents who knew quite a bit about her from her profile. However, she says the staff at Egg Donor and Surrogate Solutions were remarkable; they really cared. In fact, Katy, the agency’s executive director, attended the meeting. Despite her first apprehensions, she and Christi, the intended mother, bonded instantly and their scheduled meeting ended up lasting much longer than expected. As wonderful as the encounter was when she left Christi, Chelsea felt a sense of guilt. It was so easy for her to become a mom and all she could think about was all Christi had been through and how much she had endured.

When Chelsea, a Two_Time egg donor, was asked if she had spoken to her son about how she had helped create another family for someone she said, “Right now no, he’s too young but when he is older I will”. As for the rest of her family she said she made a point to call each of them and says there was not even one who wasn’t super excited and supportive. It was her Papa she was most concerned about and the one she chose to tell last. At almost ninety-six his health was starting to decline, however Chelsea said when she shared the news with him it was like it gave him a new lease on life. His response after hearing was, “not only are you all growing your families, but you are also helping to grow other families.”

While awaiting the arrival of a new little one she helped create, she says the emotions are no different from those of any other friend. She and Christi have formed such an incredible bond that she cannot imagine anything more satisfying than knowing that her and her husband’s dreams are finally coming true. It is truly incredible when a friend has been waiting so long to become a mother and will soon realize her dream. Her only difference is that she has made another friend that she can now offer lots of new baby advice to.

Chelsea says she has had a remarkable experience from beginning to end. A maternity photo shoot recently with Christi’s surrogate Debi was the icing on the cake. Chelsea says Debi is a superwoman, and jointly she, Christi, and Debi, are simply perfect moms making babies together.

Our team at Egg Donor & Surrogate Solutions is committed to guiding, supporting and educating you through the egg donation process. If you have a question about your ability to donate eggs, please contact us at Info@CreateAHappyFamily.com.